The crown of a the deeply impacted LL8 projects into the lumen of the cyst.

There is root resorption of the LL56 apical regions, and focal mandibular expansion and cortical thinning (LL5 area).

The features are more in keeping with a large dentigerous cyst associated with the deeply impacted LL8, or potentially (although much rarer) a mural ameloblastoma arising in association with a dentigerous cyst.

OKC is considered less likely with the root resorption 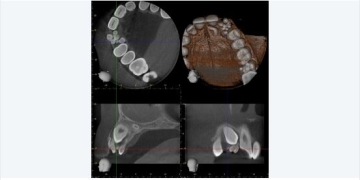 Case Study: how many denticles?

They say three is a crowd but how many denticles can you spot on this compound odontoma?